Warning: Use of undefined constant ’large’ - assumed '’large’' (this will throw an Error in a future version of PHP) in /home/498960.cloudwaysapps.com/sxrjjbqswf/public_html/wp-content/themes/cfpbfacts/parts/shared/html-header.php on line 29 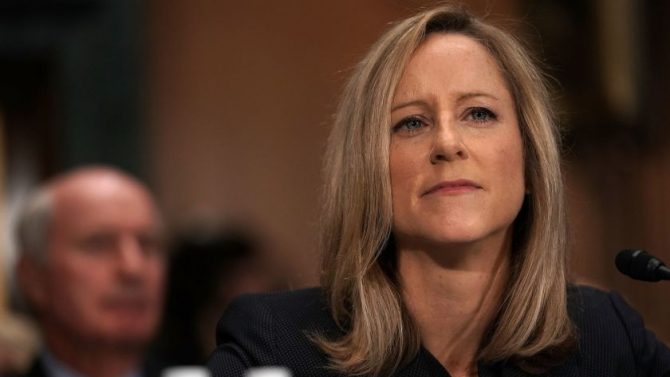 Barely a year into her term as the Director of the Consumer Financial Protection Bureau (CFPB), Kathy Kraninger is urging the Supreme Court to challenge the constitutionality of the CFPB. She has backed the Trump administration and the CFPB’s efforts to have the Court take up a lawsuit claiming the Bureau “violates the Constitution’s separation of power.”

In fact, Kraninger told senior lawmakers that the Dodd-Frank Act — which established the CFPB — gives the Bureau too much independence and infringes on the president’s executive authority.

One main concern is the Bureau’s restriction that only allows its director to be fired by the president “for cause” — typically understood as “severe incompetence or misconduct.” This requirement has been questioned multiple times as a violation of the Constitution’s separation of powers, as it would hinder the president’s decision-making power by “shielding the director.”

Kraninger had previously defended the CFPB against court challenges questioning the Bureau’s constitutionality, but it seems she’s had a change of heart. This might not bode well for the future of the Bureau, which has already been ruled unconstitutional once (though that opinion was later overturned).

Should the Supreme Court take up the issue, its decision could have potentially fatal implications for the CFPB, especially with the Bureau’s own director rooting against it.

Posted by: CFPB Facts
Next post: If elected, Warren would undo the progress CFPB has made